One Japanese icon that is recognised worldwide is the stereotype of the ‘salaryman’. You’re probably aware of it, even if you’d never heard what it was called. ‘Salaryman’ describes the idea of a typical Japanese businessman (literally: a salaried man), a cut-and-paste clone in a cut-and-paste suit, who is more dedicated to his job than to his family. 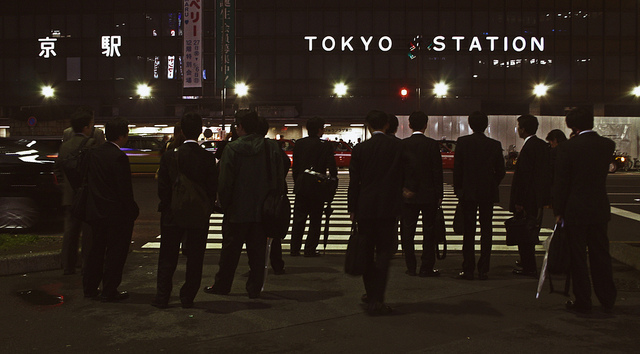 The term ‘salaryman’ refers to Japanese men who are employed in white-collar jobs. The number of white-collar jobs available in Japan increased dramatically post-WWII, as the country pursued rapid economic growth in a changing world. During this period of growth, salaryman positions came to signify masculine success. This was a time in which a salaryman typically began his career alongside his peers immediately upon graduation from university, and could generally expect lifelong job security, and hopefully strong career progression as well. The Japanese dream was completed by marriage to a woman who would be a housewife and stay-at-home mum, and a mortgage on a house as close to the city as the family could afford.

In Japan, business and bureaucracy is traditionally very much a man’s world. Women in the same workplaces are typically referred to as O.Ls – which stands for ‘Office Lady’. Unlike the salaryman role, an O.L role is not generally considered to be a career position, and these women, who are usually responsible for general administrative tasks, are typically expected to only continue working until they can find themselves a husband. Although there are some women who pursue the same opportunities a man would expect, and who would be referred to as a ‘career woman’, these women have been rare, and have faced a thick glass ceiling.

Fast-forward to Japan as it is today. Salaryman roles still exist in abundance, but the traditional job security of the salaryman flew out the window when the economic bubble burst in the early 90s. Roles for women haven’t changed much – women working in offices still make the tea and often quit to get married, and that glass ceiling hasn’t gotten very much thinner over the years. Japan’s youth are becoming increasingly disillusioned with the social expectations so celebrated by their parents’ generation. To some degree, there is a similarity here to the gap happening in Australia between Baby Boomer ideals and those held by Generation X or Y or whatever letter we’re up to now. But in Japan, the disillusionment is so strong that it has turned into a clearly identified social movement.

‘Freeter’, a term which originated in Japan, describes a person who, for one reason or another, has foregone the job security of salaried employment. The term is said to be a portmanteau of the English word ‘free’ and the German word ‘arbeiter’, which means ‘labourer’, and which already exists as a loan word in Japan to describe casual jobs – ‘arubaito’. ‘Freeter’ is often compared with the UK-originated ‘NEET’, which stands for “Not in Employment, Education or Training” – in other words, a bludger. But, as you can probably guess from the semantic explanation of the word ‘freeter’, a freeter is not necessarily unemployed.

According to the Japan Institute of Labor, there are three kinds of freeters: “moratorium” freeters, “dream pursuing” freeters, and “no alternative” freeters. Moratorium freeters are those who choose the freeter lifestyle for its freedom from responsibility, engaging in casual work in order to avoid being tied down. Dream pursuing freeters work temporary jobs while they pursue long-term goals outside of traditional white-collar employment. These two categories are freeter-by-choice. The “no alternative” freeters, on the other hand, are those who for one reason or another struggle to find more traditional employment – often those who miss the employable window immediately after graduation, which is imposed by the still-ongoing practice of companies accepting yearly large intakes of new graduates as a single group.

Regardless of individual motivation, the freeter phenomenon is a social response to the decreasing viability of what has for the past several decades been considered the optimal career path in Japan. Whether freeter by choice or by necessity, this lifestyle responds to economic and cultural shifts which have been becoming more and more apparent since the 90s. A salaryman works long hours, and death-by-overwork (‘karōshi’) is famously the tragic fate suffered by many of these hard-working businessmen. Additionally, a salaryman is still expected to be loyal to his company, but the current economic climate means that lifetime employment is by no means a guarantee anymore – it’s possible to work yourself to the grave and still not achieve job security. And women, who are becoming less inclined to settle for marriage – a separate phenomenon which is a factor in Japan’s population-decline issues – have never really had a viable white-collar career path in Japan, and often find it easier to opt-out of the conservative system through casual work or entrepreneurship than try to change it. Further, both young men and young women are increasingly rejecting the idea that a man’s first duty should be to his company. A result of this is the recent appearance of the term ‘ikumen’ – wordplay based on the popular slang for ‘hot guy’, but which actually means ‘a man who is involved in child-rearing’.

Freeters are often looked down on as irresponsible by older generations of Japanese people, who tend to consider them to be kids who reject traditional adult roles just so they can party as much as possible. Certainly, young people who match this stereotype do exist, but the majority of freeters are not rejecting responsibility – they just have different ideas of what responsibility should mean, or have fallen through the widening cracks in the Japanese dream. Not only has the proportion of white-collar jobs shrunk since the bubble burst, but also an increasing proportion of current employment opportunities in Japan are advertised as casual or part-time, and it’s difficult to say whether this trend is driven by the changing values of Japan’s young people, or by an increasing tendency in Japan for companies to emulate American business practices and cut costs at the expense of their workers. 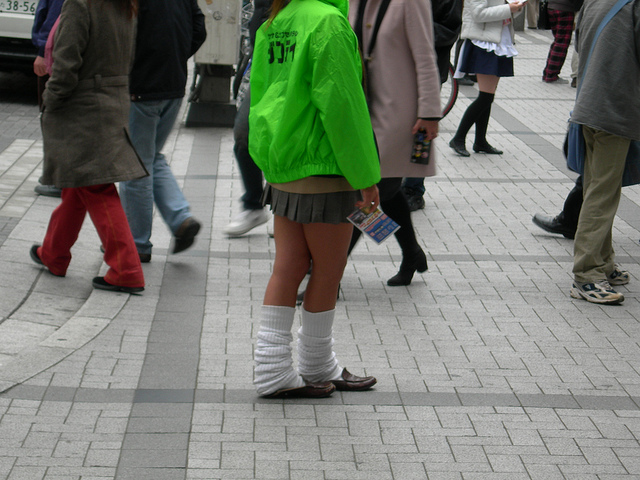 However, white-collar jobs are not the only part of the Japanese dream rejected by freeters. Whether as a result of working low-skill, low-income jobs, or a rejection of the materialism many believe to have contributed to the economic bubble of the 80s, many freeters forego the “my home” part of the Japanese dream too. Salaryman jobs usually come with a rent allowance or, in larger companies, the option to live in a dorm established by the company for single men. Paralleling with the appearance of the freeter phenomenon, there is an increasing trend for young Japanese people to remain living with their parents even as they turn 30. Out of those who choose to move out, many consider share houses or short-term leases of apartments – sometimes as short as a week! – to be affordable or flexible alternatives.

The freeter phenomenon is already having a huge impact on Japanese society, and there is much debate over whether or not the changes caused by this phenomenon – both those that have already happened, and possible future changes – are positive ones. Freeters tend to gravitate towards low-skill jobs, particularly in the service and retail industries. The abundance of low-income earners has social welfare implications which are particularly concerning given Japan’s aging population. Given the high cost of child-rearing and education, it also seems likely that the freeter phenomenon directly contributes to Japan’s population decline. However, positive changes may be associated with the freeter phenomenon as well. The past few years have seen co-working office spaces designed to facilitate entrepreneur communities popping up all over Japan’s major cities, particularly in Tokyo. Some of these co-working spaces are even characterised as global entrepreneurial communities, indicating increased opportunities for the meshing of ideas on a global scale. It’s possible that Japanese society may be moving away from the ideal of conservative worker-clones, and toward the more creative and out-of-the-box approach to employment that some of the country’s more wacky technological advancements already indicate it is capable of.

Bring in a little Japanese spark to your everyday life! 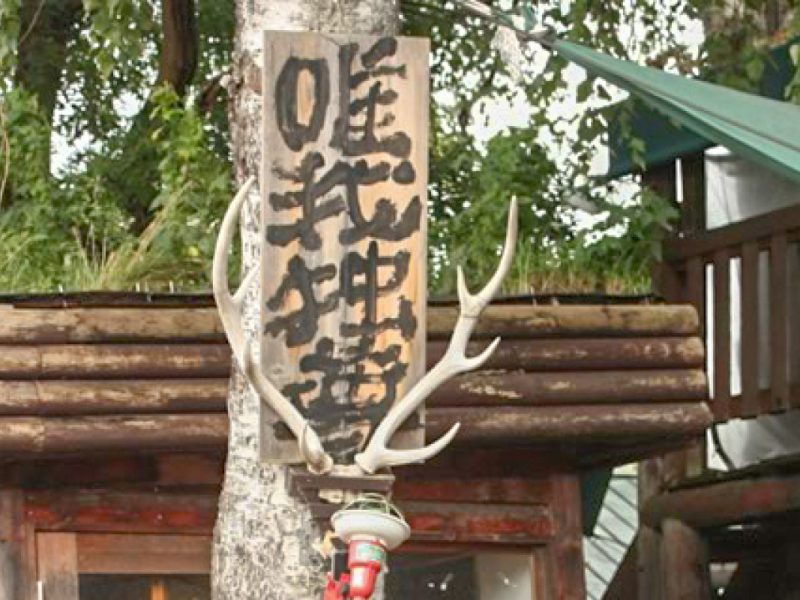 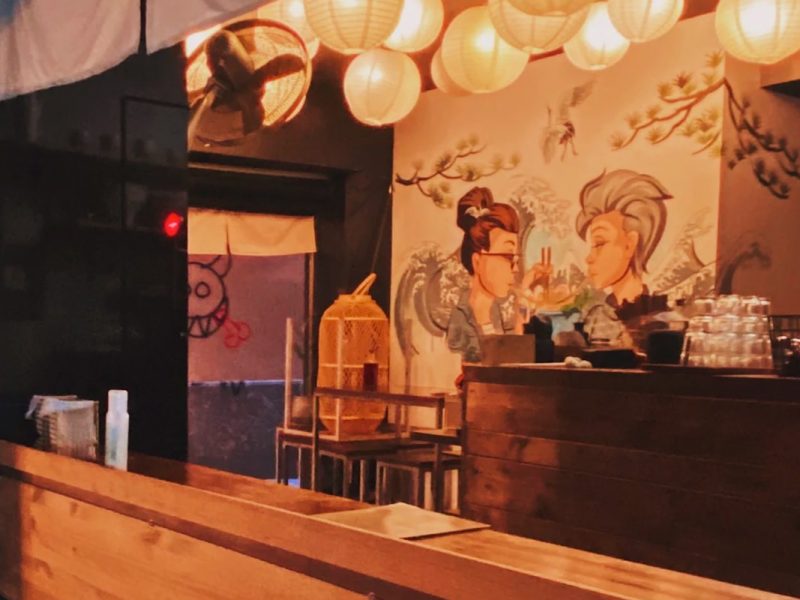 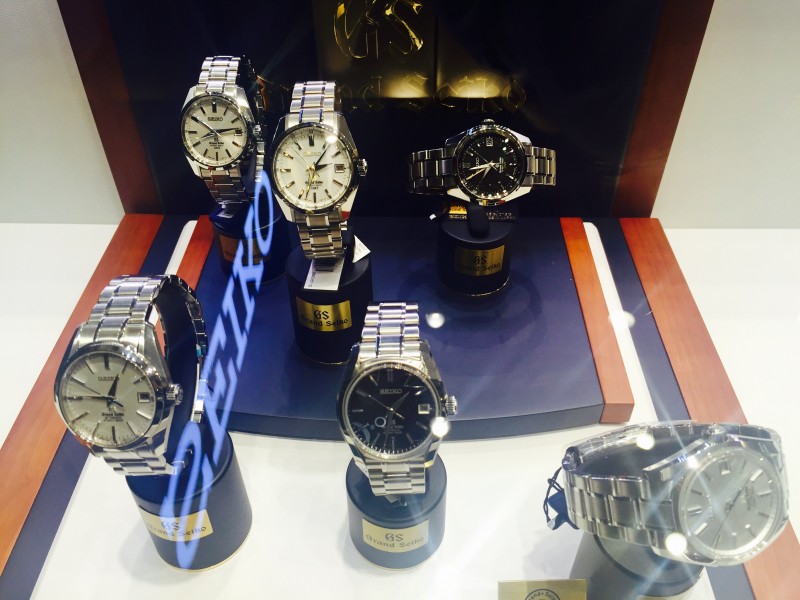