If you love animals, there is no shortage of animal experiences to be had in Japan. Many people have heard of cat cafes, but the kitty you make friends with over an overpriced soda is far from being the limit when it comes to animal paradises in Japan. Here are just a few of the places in Japan where you can observe animals in a more natural environment – and in many cases even interact with them.

What does the fox say? The viral song from a couple of years ago had several theories, but according to the Japanese, foxes say: “Kon kon!”

At Zao Fox Village in Miyagi Prefecture, you’ll have ample opportunity to decide for yourself whether this is accurate or not. The village – set up like a shrine to the god Inari, whose messengers are said to be celestial foxes – houses more than 100 adorable foxes, including 6 different species. Although there are opportunities to cuddle baby foxes, the main draw of the facility is, of course, the village specially created just for foxes, where they live in relative freedom. 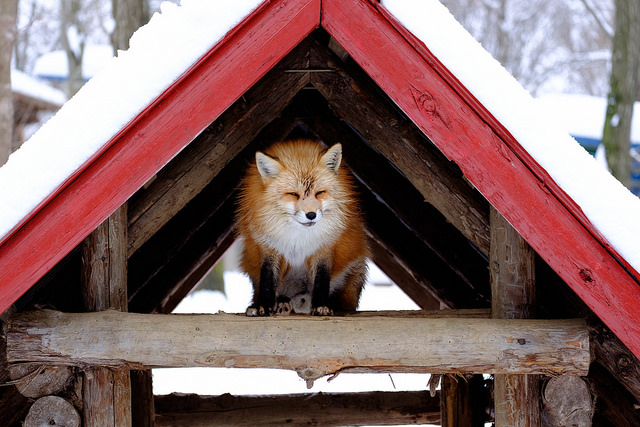 Since the foxes roaming the grounds are still mostly wild animals, a hands-off approach is encouraged, but the foxy denizens of the village are curious beasties who are completely free to come to you – so odds are good that you’ll get to interact closely with these adorable, mischievous animals.

The island of Ōkunoshima in Hiroshima Prefecture has several points of interest which relate to the Second World War, for obvious reasons – but there’s also another, much cuter reason for people to make the trip to visit this island.

In the years after the war, Ōkunoshima was developed as a park, and rabbits intentionally set loose on the island. These days, the rabbits have become a cute and fuzzy swarm, and the island has been nicknamed ‘Rabbit Island’. The little fuzzballs are approachable and practically tame, as hunting them is forbidden, and cats and dogs are also banned from the island. 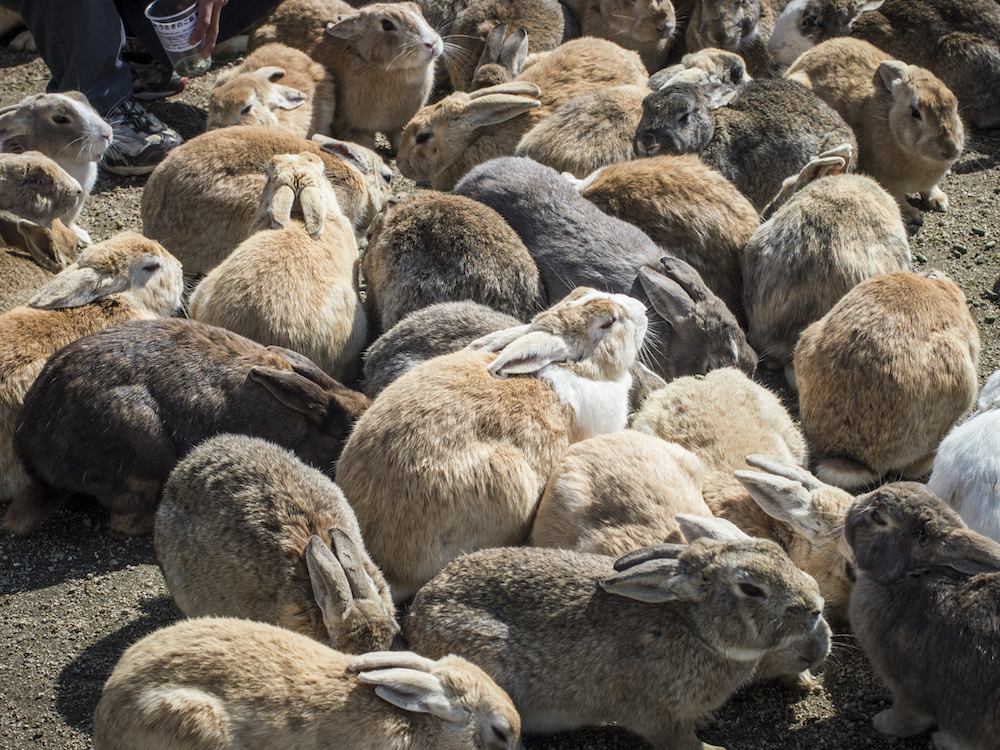 © Jun ShiraishiIt is possible to stay on the island, and as well as campsites, a resort hotel is also available.Cats

Cats have been popular companions to people in Japan for centuries – in 11th century literary classic, The Tale of Genji, a mischievous pet cat was famously responsible for one particularly scandalous storyline.

These days, Japan has no shortage of homeless kitties, and there are even several islands which have been all but given up to feline occupation. Of particular note is Tashirojima, in Miyagi Prefecture. The residents of the island have long believed that cats are lucky, and they have even built a shrine to cats. 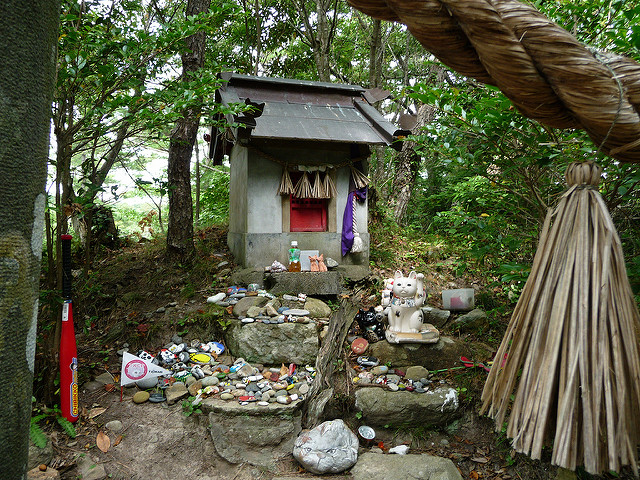 There are now fewer human residents on the island than kitties, and the island has come to be called ‘Cat Island’. In the middle of the island is an area known as ‘Manga Island’ – a group of cat-shaped buildings designed by some manga artists, which are occasionally available for visitors to stay in.

As one of Japan’s historical capitals, Nara is a city with a rich cultural heritage. This alone makes going there well worth the trip, but for animal lovers, the city has an additional appeal. In Nara Park, the sika deer roam the streets freely, co-existing quite naturally with people alongside the hustle and bustle of everyday city life. In summer, they are even known to chill en masse along the side of the road.

The deer in Nara are famous for their practice of bowing to people, although noone is quite sure where they picked up the habit. Visitors to Nara can buy crackers from venders on the street to feed the deer, but be warned – despite their apparently civilised manners, the deer are wild animals, and they are also very intelligent. They know when you’ve got food, and they can become quite aggressive if they feel you are holding something back. They might even eat your map just to show you who’s boss. 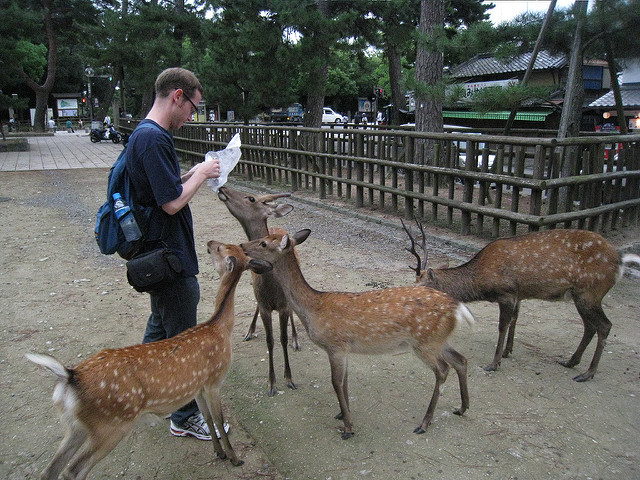 Kakegawa Kachouen in Shizuoka Prefecture is a small paradise devoted mainly to birds and flowers. Their facilities include a large greenhouse as well as open-air grounds and a wide pond, with birds roaming each section except the dining area – everything from common ducks to emus to fancy tropical birdies. 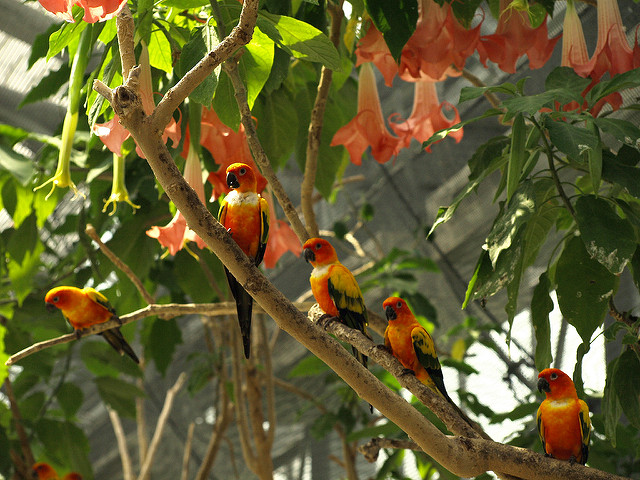 For the most part the park’s avian inhabitants will ignore visitors, but people are free to walk among them and admire the many species of birds, and also feed many of them, if they will come to you. Additionally, the park also offers supervised direct contact with certain birds on an event schedule – for instance, feeding the penguins, or taking photos with the owls. Also on the event schedule are regular live performances featuring a range of birds, which cooperate with handlers to show off their intelligence and skills.

The park also prides itself on accessibility, and it has been designed to be ‘barrier-free’.

In a certain region in the mountains of Nagano Prefecture, there is a group of monkeys who just love a nice, steamy hot spring bath. At Jigokudani Yaen-koen Monkey Park, the monkeys have their very own natural onsen, and thanks to the attendants who feed them, they can be observed in this environment all year round. 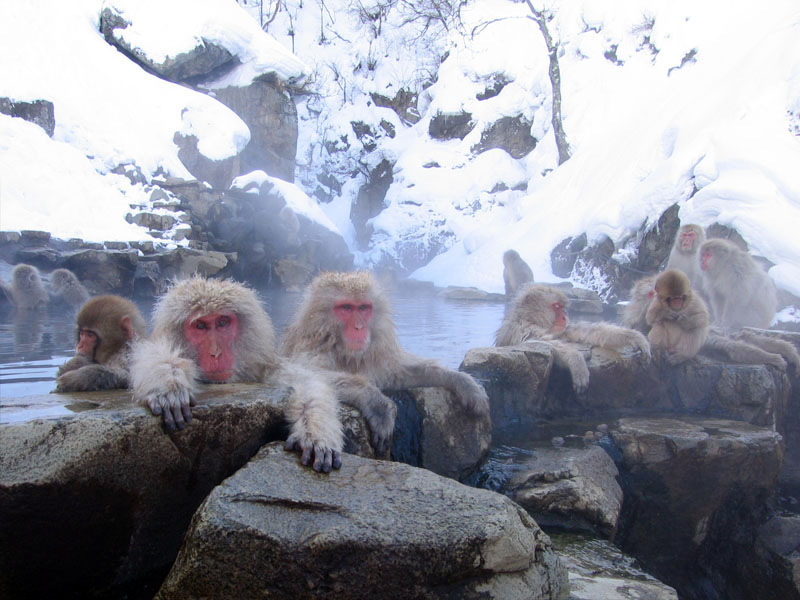 While you might also be fortunate – or unfortunate – enough to find a red-faced yet unashamed monkey sliding in next to you in the outdoor hot spring at the local inn, for the most part the monkeys do stick to their own area.

At Jigokudani Yaen-koen, you will get the chance to observe these bathing monkeys in their own dedicated onsen, and you are more than welcome to take photos. Keep in mind, however, that these are completely wild monkeys who are gracious enough to ignore the humans staring at them while they enjoy the hot water, so pay attention to the rules of the park and do not try to interact with or feed the monkeys yourself.

At the northeasternmost point of Japan’s main island, Honshu, Cape Shiriyazaki is almost as far north as you can get in Japan without ending up in Hokkaido. This region is home to the wild horses which are protected by Aomori Prefecture as a natural treasure. They are known as ‘kandachime’, a name which refers to the horses’ ability to withstand the cold, harsh weather all year round – they remain in outdoor pastures even throughout the winter.

These horses are looked after by humans, but during the day they are allowed to roam, and they interact freely with tourists. It’s possible to feed them, and even pet them, as long as you’re gentle. The best time to see these horses is during the warmer months, when you can admire the gorgeous scene they make against the green fields and the historical Shiriyazaki Lighthouse. 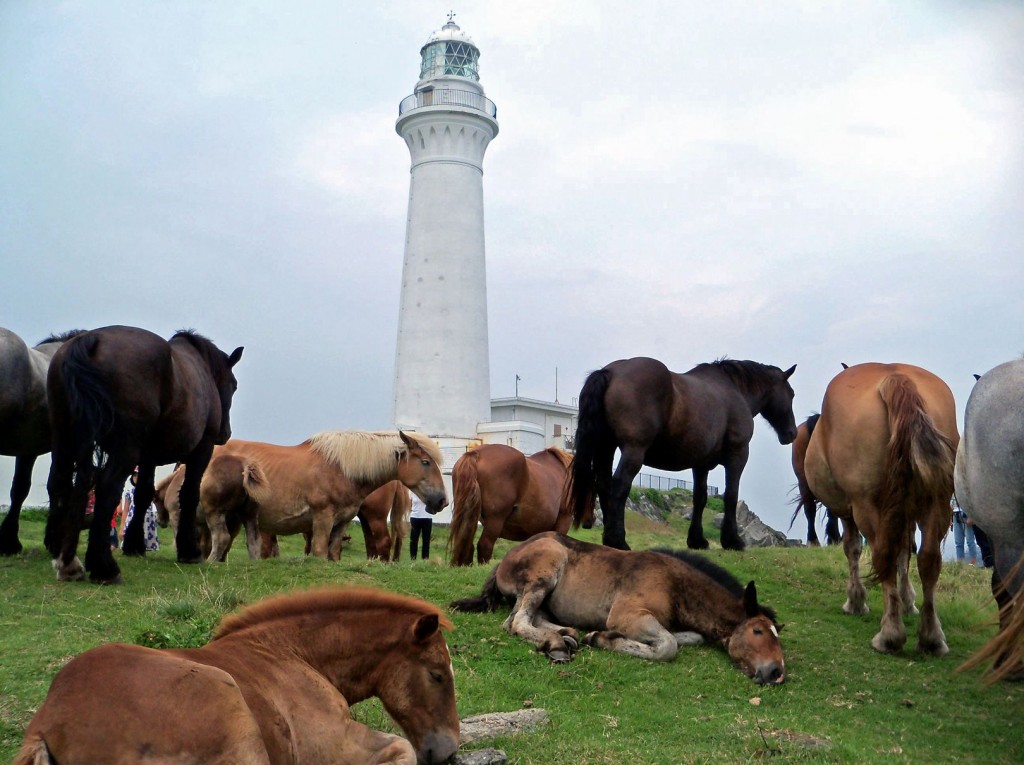 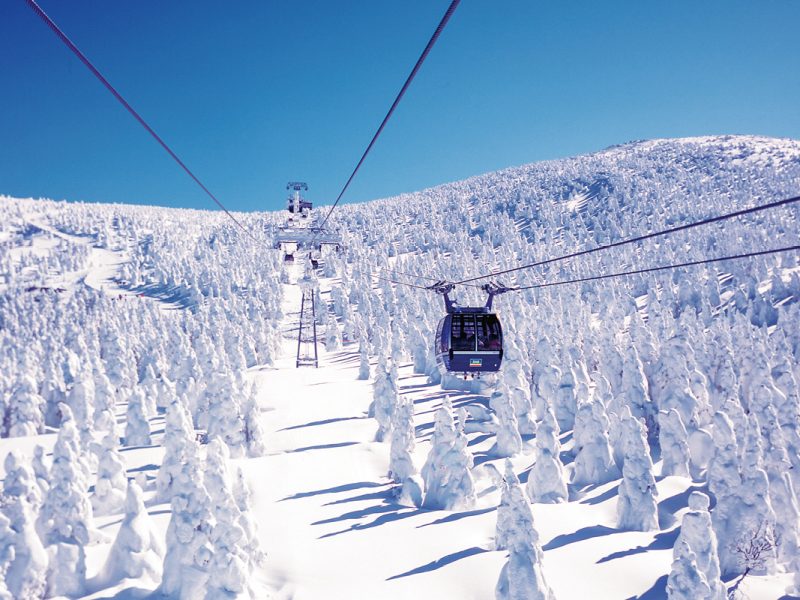 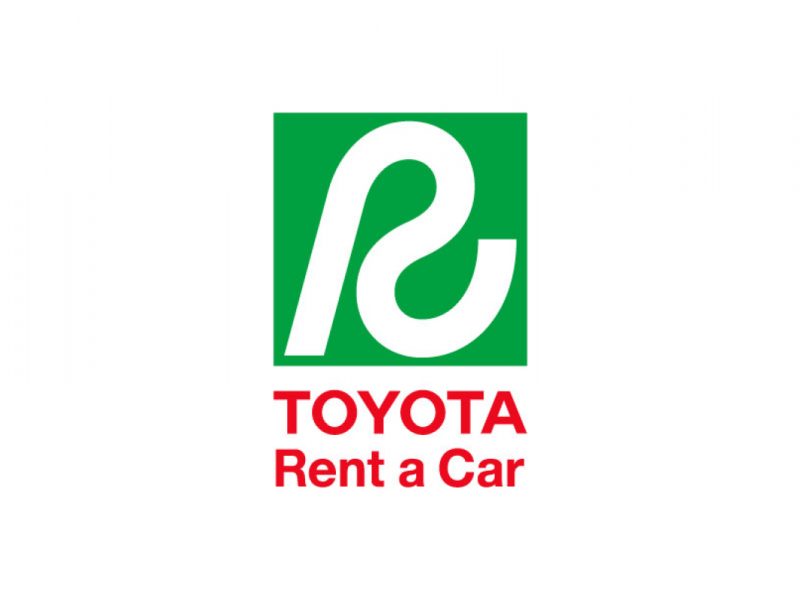 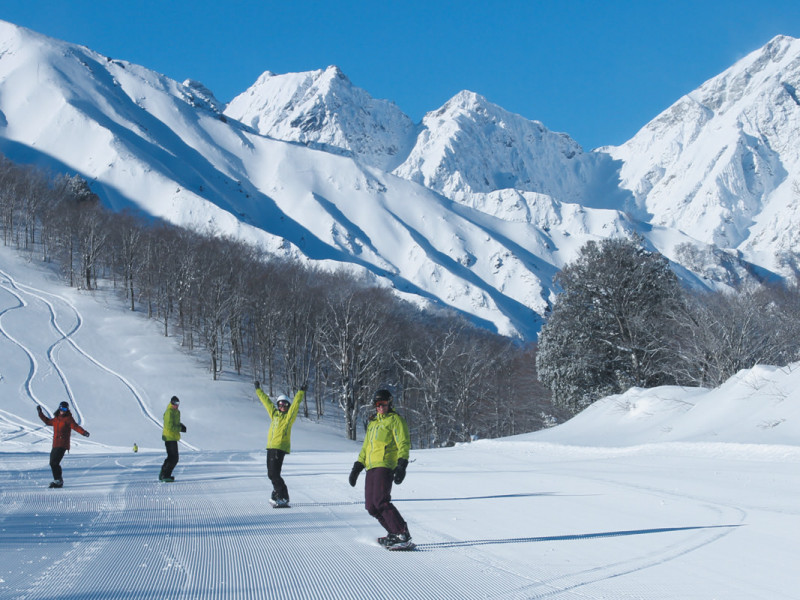