Nestling in the shadows underneath Tokyo’s Gotanda station is a small udon restaurant – standing room only. A couple of doors down is another restaurant, advertising sushi from just ¥75, also chair-free. 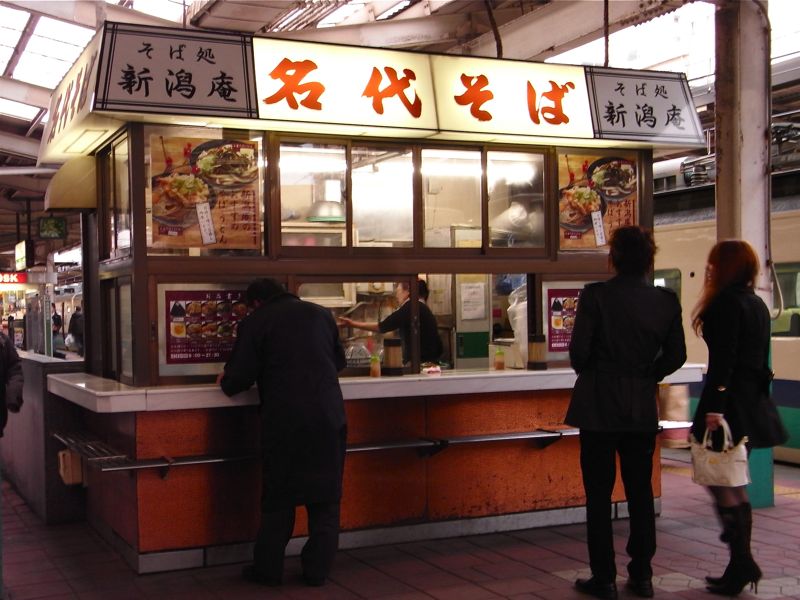 These restaurants, and others like them, are part of a small trend in Japan for ‘standing restaurants’. It’s easy to see the appeal such a setup would have for a restaurant owner. Chairs take up space, and getting rid of them enables a restaurant to fit more customers into a smaller area. And, unable to sit, customers are unlikely to linger over their food, resulting in rapid customer turnover – and increased profits if your staff can move fast enough to keep pace. But why would hungry people be willing to go to a restaurant where they can’t sit down?

Anyone who has been to Japan will know that food holds a special place in the hearts of Japanese people. It can be said that food is the glue that holds Japanese society together. Few Japanese people have the space to entertain at home, so most people in Japan use the country’s many bars, restaurants and cafes as social hubs. Considering this social approach to food, standing restaurants can seem at first rather counter-intuitive.

The secret of their success lies in a combination of convenience, affordability, and quality. Japan’s standing restaurants mainly target the country’s ‘salaryman’ population – the typical Japanese businessmen, often overworked and renowned worldwide for their dedication to their jobs. Standing restaurants are particularly appealing to the unmarried young men who lack the energy or inclination to cook for themselves. Situated close to train stations and in business districts, these restaurants are usually perfectly positioned for a tired worker to just stop by and grab a bite to eat on the way home from the office, or when they pop out for a quick lunch break. Even if there’s a queue, the wait time won’t be long, because every customer has the same goal – get food, fill belly, get home or back to the office ASAP.

Standing restaurants, especially the popular ones, can also be reliably expected to serve delicious, high quality food at a cheap price. Oniyamma, the udon restaurant underneath Gotanda station, specialises in fresh, hand-made noodles. And at less than ¥500, their most popular dish of udon topped with succulent pieces of chicken tempura is comparable in price to buying dinner from the local conbini (Japanese convenience stores, which are truly convenient, unlike their counterparts in Australia) – and a great deal tastier. Because after all, even if they’re in a rush, Japanese people are often foodies at heart.

As a visitor to Japan, standing restaurants can seem very strange. Many of us may have even been told that to eat standing up is unhealthy – it’s bad for digestion, you’ll get fat… and so on. But actually, there is very little scientific evidence to recommend an eating position either way. And in Japan, eating while standing up – ‘tachigui’, as it’s known – has enjoyed an extensive and enduring history. It began with mobile food stands known as ‘yatai’, which still exist today, and some say this history goes as far back as the early Edo period – that’s the 17th century, to us. Their current association with train stations, though, is post-WWII, and thus relatively recent. Japanese people remain among the healthiest and long-lived in the world, so all of this eating while standing up obviously hasn’t done them much harm. 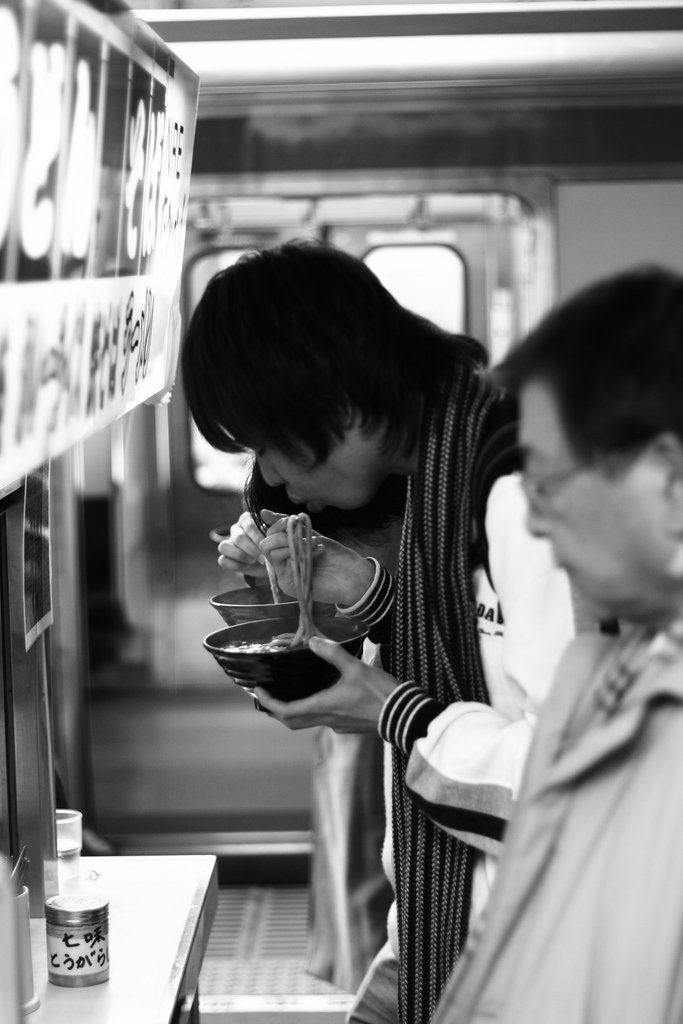 Standing restaurants are a great way to try traditional Japanese food while not spending too much, and it’s really not as uncomfortable as it looks. To eat at a standing restaurant, you’ll generally pay for your food when you order. Particularly at standing noodle restaurants, you’ll often be required to select your order from a ticket machine, which will have a button for each dish (sometimes marked with photos of the food along with the written labels), as well as options for toppings, side menus, and serving sizes other than the standard (usually going larger, not smaller, because working men are expected to get very hungry). This order system serves to allow staff to focus on food preparation. The menu will usually be written only in Japanese, so unless you’re feeling particularly adventurous, bringing a friend who reads Japanese is ideal. But even if you go alone, a good guidebook should allow you to decipher the main parts of the menu, or at least get someone to help you. Also, Japanese restaurants have a tendency to specialise in one particular kind of food, the idea being that if you really focus on one thing, you’ll be able to do it really well. Standing restaurants are no exception, so even if you order at random, chances are you won’t be served anything too unexpected – most (or all of) the menu will be variations on whatever basic dish the restaurant specialises in.

Once you’re in the restaurant, shuffle up to a space at the bench – there will often be a basket or shelf underneath the bench for you to stow your bag (if you have one) – and hand your order ticket to the staff. Enjoy your food when it arrives, and if it’s noodles, feel free to slurp away to your heart’s content – many Japanese people believe that slurping noodles makes them more enjoyable. When your belly’s full, don’t forget to thank the staff for the meal as you leave! The standard Japanese phrase to give thanks for a meal is ‘gochisōsama deshita’, but if that’s too much of a mouthful for you to pronounce, the staff will be just as happy to be thanked in English – it’s the thought that counts.

Unfortunately – or fortunately, if it’s your kind of thing – Japan still has very much of a smoking culture. Cigarettes are a lot more affordable than in Australia, despite a recent price-raise, and there are no legal restrictions on smoking in restaurants or cafes. Many larger venues have chosen to offer smoking and non-smoking sections for years, and recently the restaurant industry has been starting to self-regulate further on this matter, with a few places starting to implement non-smoking lunchtimes, and a small smattering of restaurants and cafes choosing to go smoke-free entirely. But like much of the industry still, very few standing restaurants are explicitly smoke-free. However, customers at standing restaurants are unlikely to linger long enough to smoke, so your chances of getting a smoke-free meal are perhaps higher than in many conventional restaurants. The main exception to this rule is of course the standing restaurants that serve alcohol, where it’s quite expected that customers will enjoy a leisurely cigarette along with their drink, as they relax in the evenings after a hard day at work.

Standing restaurants are a great way to get a tasty and satisfying meal on the go and on a small budget, which makes them ideal not only for Japanese workers, but also for backpackers and other visitors to Japan who want to pack in as much sightseeing on their trip as possible. It’s the traditional Japanese fast food, if you will, and it’s a lot better for you than McDonalds. Of course, you won’t want to eat every meal in a standing restaurant. It’s great to sit and relax for a while, lingering over a good meal. But for the times when you’re tempted to just grab another one of those tuna-mayo onigiri from the conbini, because you’re too busy having fun to waste too much time on food, look around you for a standing restaurant. After all, if you’re in Japan, why wouldn’t you take every opportunity to eat Japanese food? The standing restaurants may look strange, but don’t be scared to try them – once you’ve been the first time, you’ll never look back. 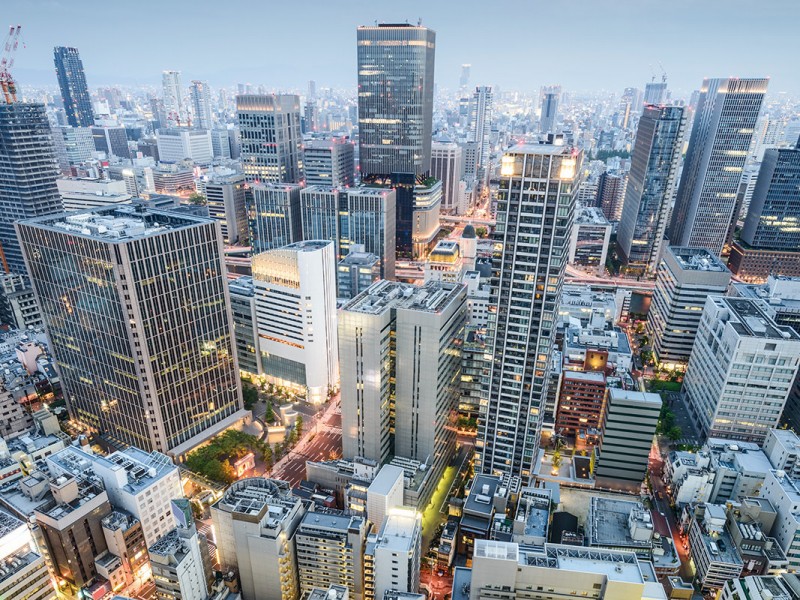 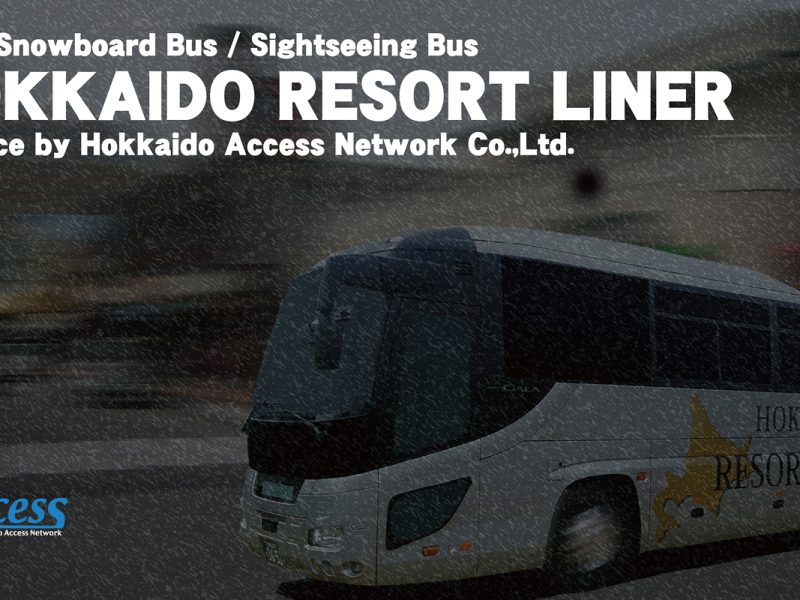 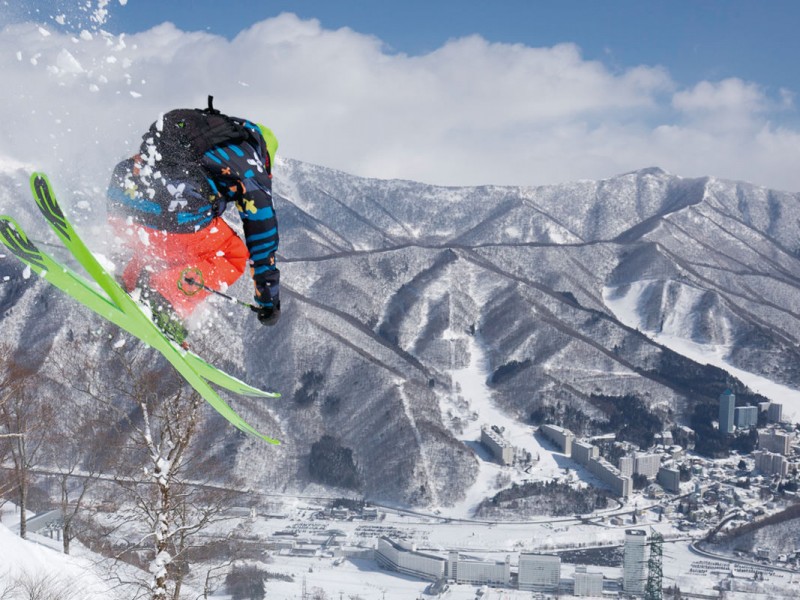 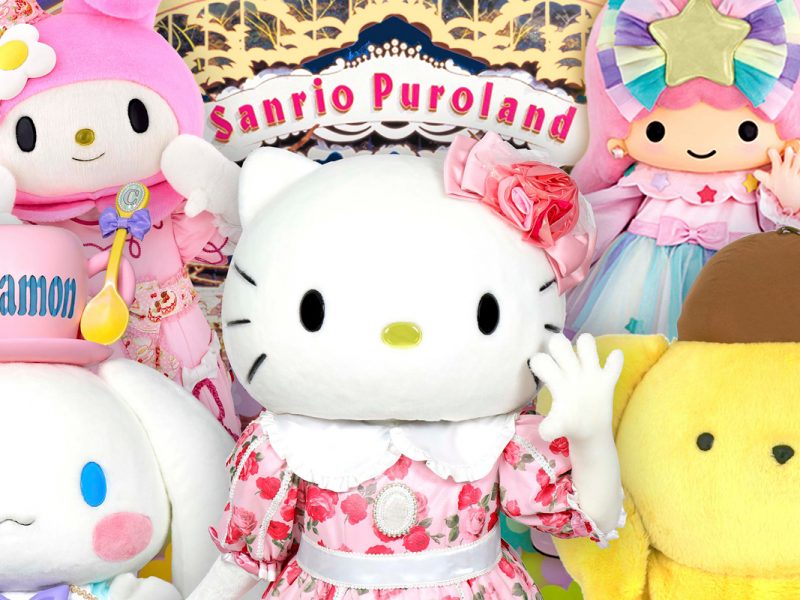