Why Travel to Okinawa for Golf ?

Finding a place to play golf in Japan during winter may be difficult because many cities, including Tokyo, will see snowfall. Thus, most golf places will temporarily close due to bad weather conditions. However, Okinawa is one destination for avid golfers who want to golf all year around. With its distinctive subtropical climate, Okinawa golf courses maintain the evergreen lawns all year, meaning golfers have the opportunity to play golf whenever they want.

Okinawa Islands is home to several golf courses. Even though these islands spread across the waters of the Pacific Ocean, the farthest one is only 2 hours away from Naha Airport, the largest airport in Okinawa prefecture. Playing a round of golf in Japan is typically an all-day event, usually including a relaxing lunch break after nine holes. However, it is different in Okinawa. Golfers hop between various courses in the morning and the afternoon, sometimes spending the spare time sightseeing. There are approximately 40 golf courses spread out on the Okinawa Archipelago, all showcasing the simplicity of island life and relaxing vibe. Playing golf in Okinawa is an exceptional experience that no other region in Japan can replicate.

Located as the southernmost prefecture of Japan, Okinawa is a tropical oasis for visitors due to the coral reefs, crystal-clear blue seas, white sand beaches, and beautiful natural scenery combined to form spectacular and diverse natural habitat. Although being separate from mainland Japan, Okinawa Prefecture constitutes of 160 large and small islands, including 47 inhabited islands, and ranges over a vast ocean area covering approximately 400 kilometres north to south and 1,000 kilometres east to west. Japan’s newest prefecture, Okinawa, is famous for its beautiful oceans, tantalizing beaches and relaxed, easy-going locals. These islands were once an independent nation known as the Ryukyu Kingdom, with many cultural and geographical differences from Japan’s mainland. There are many distinct differences between Mainland Japanese and Okinawan Japanese to the point where it sometimes feels like its own language rather than a dialect. During the Heian Period (794-1185) of mainland Japan, the Ryukyu Kingdom was a prosperous sovereign nation of merchants, artisans, fishers and farmers, maintaining close political ties with China and other countries in southeast Asia. It was not until 1892 that the Meiji Government officially annexed the islands by force, absorbing them into Japan’s political map as Okinawa Prefecture in 1879.

How to Get to Okinawa?

Naha Airport (OKA), sometimes called Okinawa Airport, is in the capital city of Naha. The airport is the only one on Okinawa Island and is the main hub for travel to other islands in Okinawa Prefecture, including Miyako Island, Ishigaki Island, Irimote Island, and Kume Island. Naha Airport is the fifth largest airport in Japan and has flights from more than 20 cities all over the country. Naha Airport’s international terminal has flights to and from Seoul, Taipei, and Shanghai. Ferries offer service between Okinawa and several places on mainland Japan, including Tokyo, Nagoya, Osaka, Kobe, Fukuoka, and Kagoshima.

Explore More with the Articles as Follows; Located in one of the popular resort destinations, the Onna Village, is a unique hilly golf course overlooking the glimmering emerald East China Sea. Most holes provide a spectacular view of the ocean, enriching the golfers’ experiences by having natural beauty in the background of the play. Only an hour away from Naha airport, golfers can visit this place blessed with beautiful beaches, vast nature, and a pleasant climate. All 27 holes feature a stunning natural landscape, including downhill shots and undulations overlooking the magnificent ocean views, as well as shots over the valleys. PGM offers an excellent golfing experience with a commanding view of the radiant blue sky and distant sea. Stay at the nearby Kafuu Resort Fuchaku Condo Hotel to maximise your golfing experience. 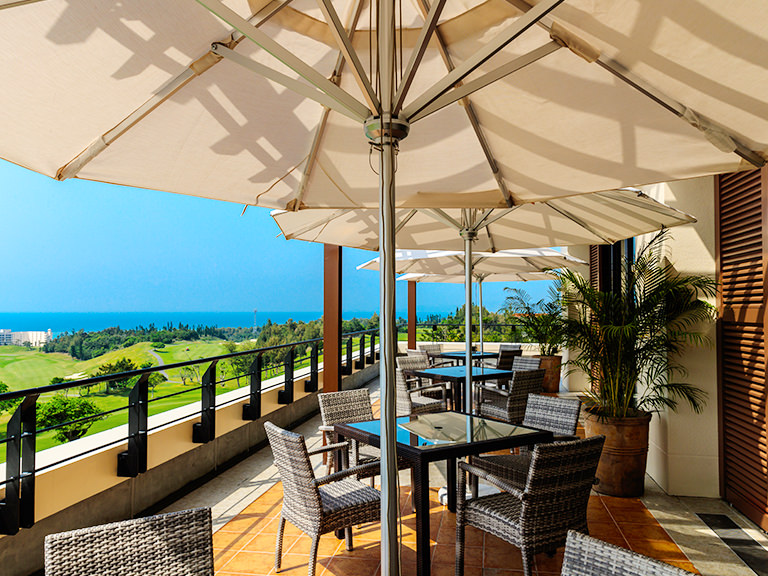 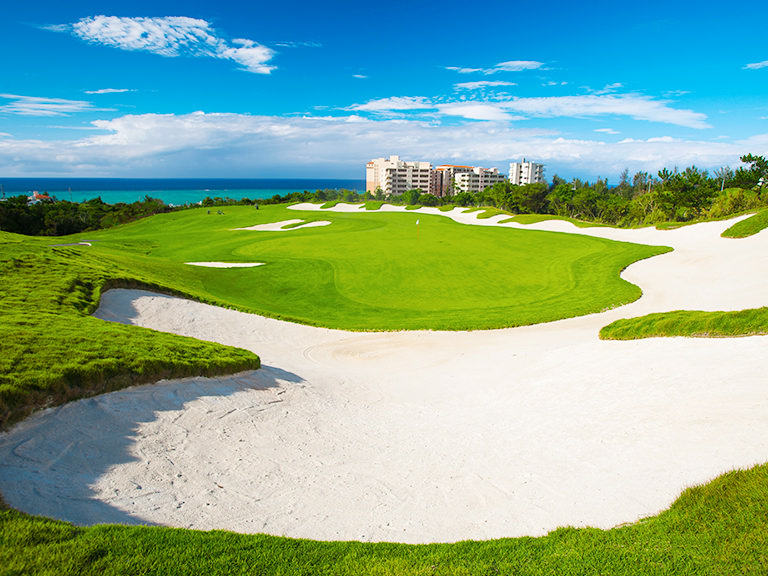 In 2017, the club underwent a full renovation under the supervision of Isao Aoki, a Japanese golfing legend elected to the World Golf Hall of Fame in 2004. Isao designed the course to be more challenging while still accommodating to players of all levels. There are three courses: Hibiscus, Deigo, and Pooh Gen Birear. These courses are all named after native flowers in Okinawa.

Hibiscus and Deigo are for beginners, while Pooh Gen Birear is more for the advanced players. This golf club also hosted the Heiwa PGM Championship for three consecutive years, so there is no doubt that its courses are world-level. PGM Golf Resort Okinawa checks all of the boxes that any golfer could ever want during a round: beautiful nature, various challenging shots, and the thrill. Having a picnic outdoors after a day of play under the red-orange sunset is sensational, highly recommended to everyone. 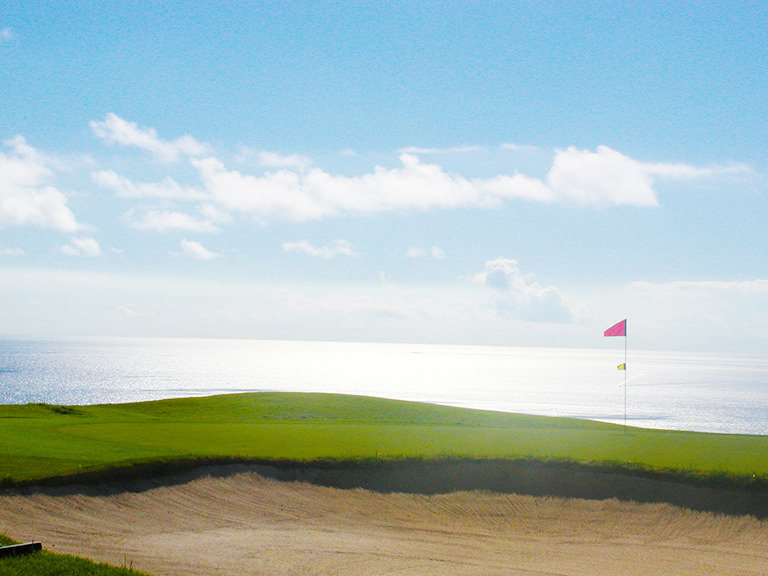 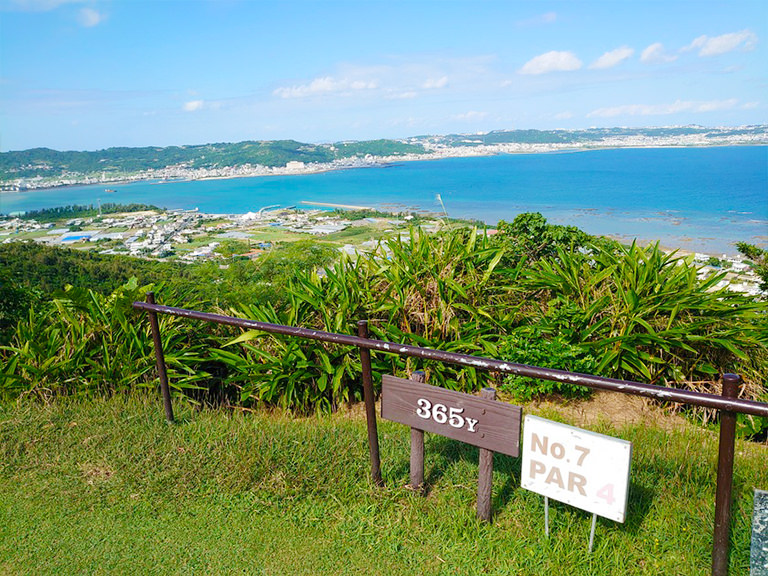 Shurei provides an exclusive golfing experience, with every tee hole showcasing a breathtaking overview of the vast blue sea. The magnificent enclosing nature boosted the golf club to rank itself among Japan’s 100 most beautiful golf courses. Shurei Country Club sits on the Chinen peninsula high ground. The elevated location of the golf course gives players a sense of freedom and allows them to soak in the phenomenal view of the ocean and the perfect greens. Bentgrass is used for the golf courses, meaning that players can enjoy the smooth lawn all year long. Even though untouched nature surrounds Shurei, it is only a 30-minute drive from Naha, making it easily accessible even for visiting golf enthusiasts. 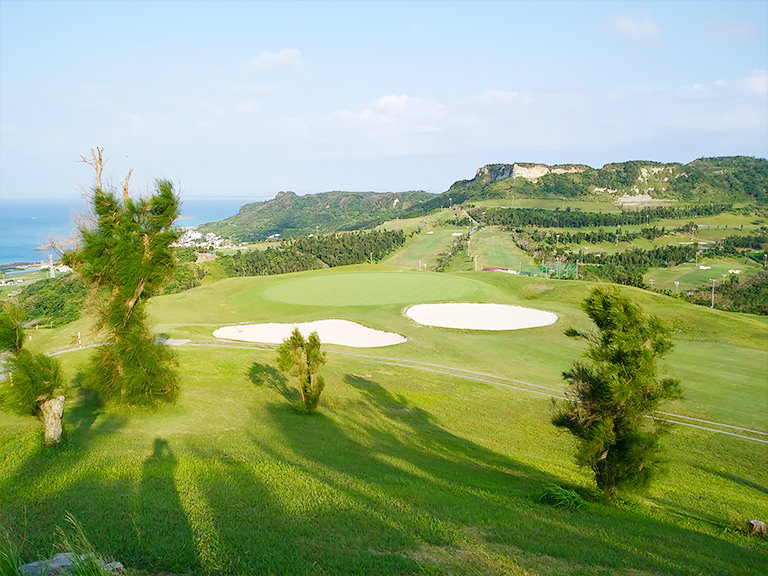 Because of its high location, the ocean wind has an immense impact on the gameplay. The club challenges the players to read the landscape and the weather and come up with a strategy accordingly. The hills require precise techniques to perfect the uphill and downhill lies, forcing players to adjust to each hole. While all holes have an excellent ocean view, the 6th hole is the highlight because of the Pacific Ocean on the left and the Nakagusukuwan Port on the right. The courses at Shurei is relatively shorter compared to the other ones since the driving distance is shorter. However, the banker and water hazard are very well-placed. So, golfers need to have good golf course navigation and strategies. This golf club is suited for intermediate players and above. 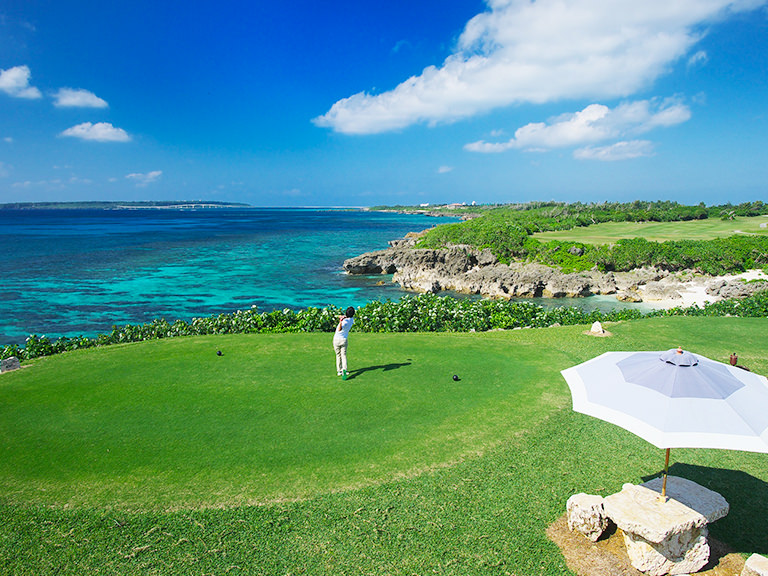 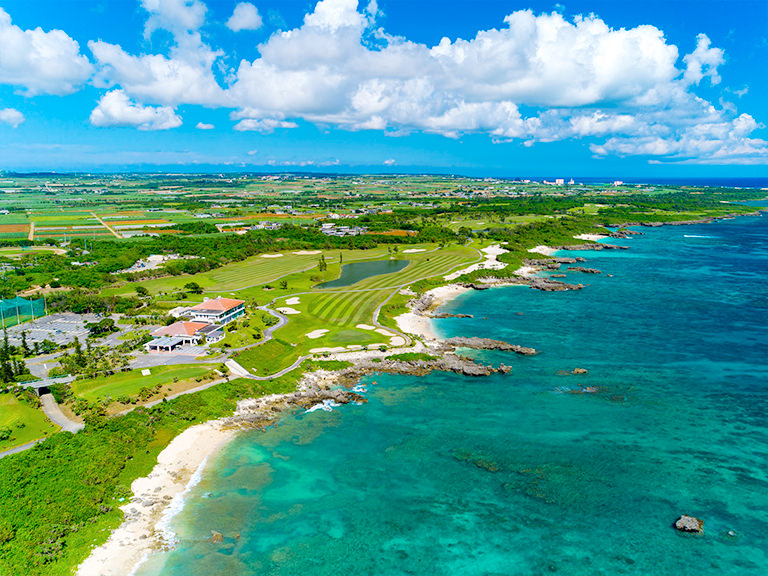 Nestled within the beautiful Coral Sea and exotic nature on Miyako Island lies the Emerald Coast Golf Links. The warm subtropical weather on the island creates the perfect condition for golfing. Designed as a links course, it is adjacent to Yonaha Maehama Beach, a pristine white sandy beach with clear turquoise water. If you’re lucky, you will be able to encounter peacocks or other unique animals at the course. Players can experience this rare golf adventure in the rich natural setting only at Emerald Coast Golf Links. 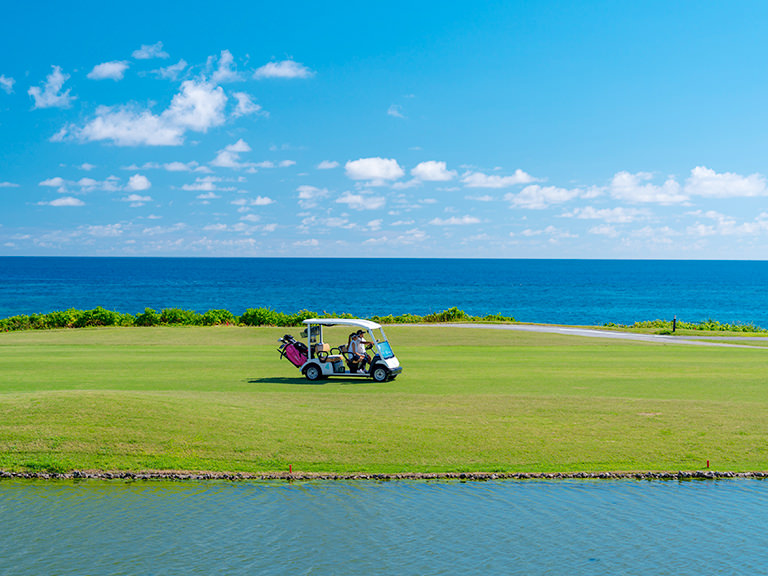 This course has successfully integrated the superb coastal landscape into its design. The comfortable sea breeze blows through the golf course, but the 16th and 18th hole are the highlights. The 16th hole allows players to perform golf shots over the ocean. For the 18th hole, golfers have to strike from the natural beach bunker. Putting on the green and jutting out into the crystal-clear water, these are just some of the exclusive experiences at Emerald Coast. Twosome round is also allowed throughout the year. The carts come with a navigation system that can be used anywhere, even on the fairway. Additionally, golfers can hire the latest model golf clubs for the best experience*. Emerald Coast has services to accommodate every golfers’ needs, making it a must-visit for all golf enthusiasts.

*Some services may not operate due to unforeseen weather and course conditions.

Here are some of the top things to do and see in Okinawa Prefecture in addition to the exceptional golf experiences.

Shurijo Castle symbolizes the history and culture of Okinawa whereas in 1945, the Battle of Okinawa took place. Shurijo Castle was left in ruins but in 1992, commemorating the 20th year since Okinawa’s reversion to Japan, Shurijo Castle was restored and opened as a national park. In 2019, large parts of Shuri Castle were destroyed in a fire causing the Shurijo Castle Park to close. However, as of October 2020, parts of Shurijo Castle Park have reopened to the public for the first time following a devastating fire. Visitors can now explore the castle’s grounds, walk through the Hoshinmon gate, enter the Seiden main hall and see the underground ruins of the original castle structure which are a designated UNESCO World Heritage Site. You can also discover the art of creating bingata, ryusen, and other handmade Okinawan textiles at Shuri Ryusen, a few minutes’ walk from Shuri Castle.

This dish is the Okinawans’ go-to “zi char” dish that is usually served with rice. A champuru (mixed together) is a combination of Japanese bitter melon (goya), egg, tofu, other vegetables and spam, a staple of Okinawa. This dish will surprise you with its slightly charred flavour that is enhanced with the unique pairing of spam and goya.

The Churaumi Aquarium is widely considered Japan’s best aquarium and is the main attraction of the Ocean Expo Park, about 90 kilometres from Naha. The aquarium was completely redesigned and reopened in 2002. The highlight of a visit to the Churaumi Aquarium is the massive Kuroshio Tank, one of the largest in the world. The tank takes its name from the warm Kuroshio current which plays a large part in the variety of Okinawa’s of marine life. The tank contains a wide variety of species, the most striking of which are the giant whale sharks and manta rays.

While this dish may look like any other bowl of Japanese udon, Okinawa Soba is distinctively different as it is the only soba noodle that is made from 100% wheat flour, making it much chewier and thicker than the rest. It is typically served in a bowl of smoked bonito broth that is lighter on the palate with a clean after taste. Along with seaweed and pickled ginger, the Okinawans love their soba with spareribs or three-layered pork.

Miyako Island (宮古島, Miyakojima), located 300 kilometres south of Okinawa Main Island and 100 kilometres north of the Yaeyama Islands, is known for some of Japan’s best beaches and as a great destination for snorkelling and diving in the coral reefs. The sub-tropical climate provides mild weather year around. Besides the beaches, snorkelling and diving, Miyako offers a range of other attractions, including beautiful nature walks, cultural sites, and delicious cuisine such as Goya chanpuru and soba noodles. A couple of elegant bridges to neighbouring islands are available so renting a bicycle or car can make for a nice adventure. Direct flights are available from Tokyo, Osaka, Nagoya, Naha, Ishigaki and Tarama.

Rafute has been eaten in Okinawa since the Ryukyu Kingdom (1429–1879) when it was served as a form of Okinawan Royal Cuisine. Rafute consists of the three most signature produce/products in Okinawa: pork, black sugar, and awamori (distilled liquor). The slow cooking process yields the most tender and melt-in-your-mouth texture.

Made from Okinawa Brown Sugar, Sata Andagi is a fried brown sugar doughnut that can only be found in Okinawa, and rare around mainland Japan. Easily available at street side stalls, this handmade dessert is made with wheat flour, sugar, milk and egg yolk — crisp on the outside and soft on the inside. Its taste and texture are very different from normal doughnuts with it being less sweet and more biscuit-like in texture.

For more information, visit the following link to explore more about Okinawa.