“We live on different time here, Island Time… you can enjoy and relax” said the receptionist checking me into the hotel.

Soon I became acutely aware of the flow of Island Time, my shoulders relaxed as the stresses of daily life left my body. The pace is leisurely at Ishigakijima it almost feels like even the clock is taking it easy, as long, hot, lazy days in paradise stretch on.

Ishigakijima is a small island in the south of Okinawa, it is part of the Yaeyama archipelago. What it lacks in man-made tourist spots it makes up for with an abundance of natural beauty. Shallow crystal clear waters lap up onto white sand or coral laden beaches, dense jungle stretches over mountains, mangroves line rivers and colourful marine life play in the coral under the surface. It is very close to a handful of smaller islands worth a visit. 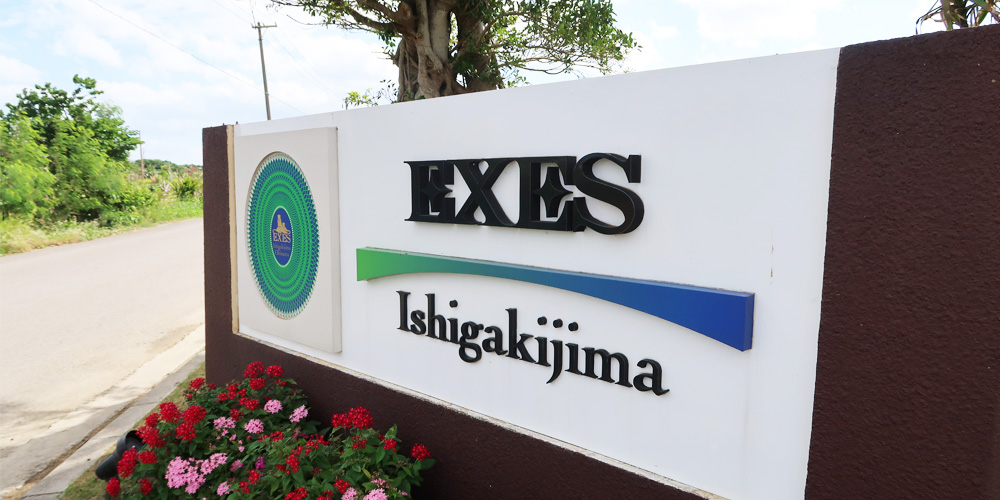 I stayed two nights at Okinawa Exes Ishigakijima, the staff were all very helpful and friendly especially the receptionist who checked me in. He meticulously introduced all the hotel facilities and created a sight-seeing plan to suit my tastes. I am indebted to him as I found English services and translated tourist information to be limited at Ishigakijima which is most popular among Japanese mainland visitors. This is not an issue as long as you are prepared, like the rest of Japan the hospitality is second to none and it’s nice to feel like you’re experiencing a true part of Japan, as yet only lightly touched by Western tourism.

Unfortunately, the weather was not in my favour as it was too windy to go snorkelling or diving. Taking this into account on my first day of exploring I took a 10-minute ferry trip to Taketomi Island. 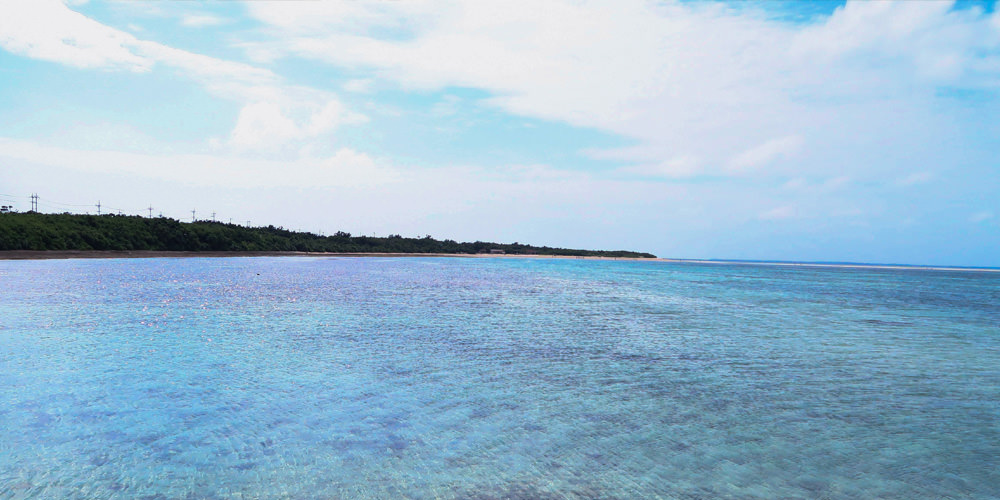 Upon setting foot on Taketomi Island I felt like I was transported back in time. Small single level Okinawan style houses with red pottery roof tiles sat in a tightknit village with sand roads, hand-picked rock fences and lush green coastal trees shading us from the harsh sun. 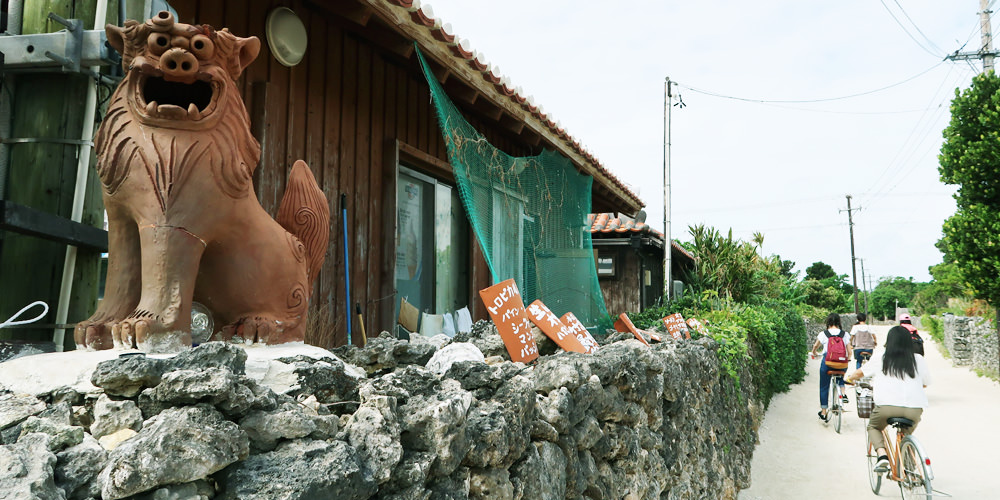 The tour was conducted in Japanese however, I was given some English information to supplement my experience. Our lively host was full of stories about Taketomi Island, water buffalos, Okinawan tradition and at one point he spoke in-depth about Miss Universe, that part of the tour went over my head as my grasp of Japanese is still elementary. Using lyrics posted on the roof of the cart we joined in a sing-a-long, a form of karaoke like no other. 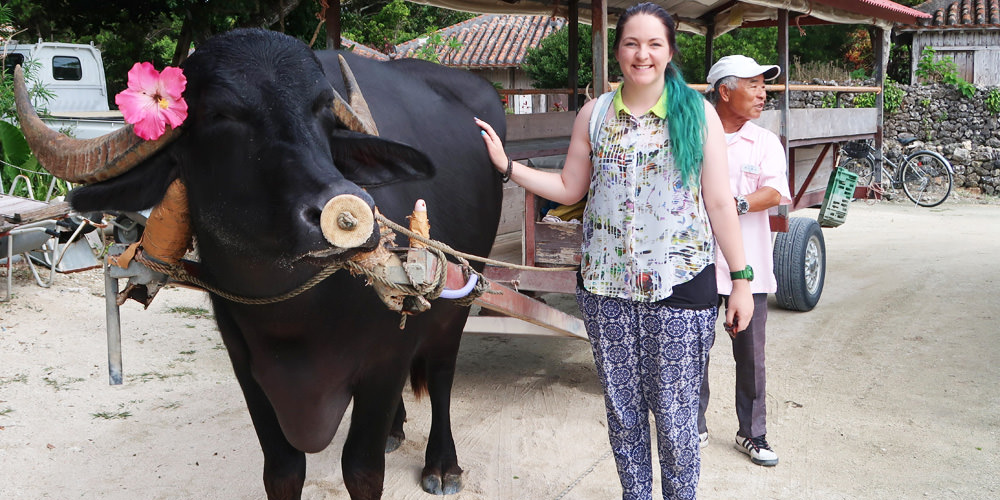 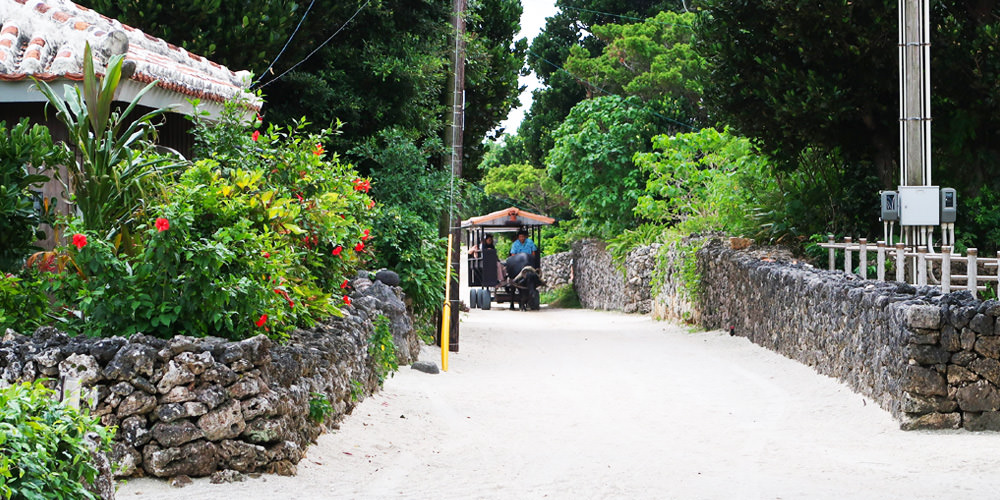 After bidding Kuro-chan adieu I took to exploring the tiny island on foot. Cheeky Shisa’s (Okinawan stone guardians that look like a hybrid of a dog and a lion) giggled at me from rooftops as I strolled through the tight streets passing small restaurants and finding shops stock full with Okinawan inspired treasures.

Using a map, I discovered pristine beaches. I waded in the warm water and my thoughts grew dreamy as I took in the sparkling expanse of the sea ahead of me. After walking back towards the main village I was feeling quite hot and thirsty, I pulled up a chair under a big tree and enjoyed mango flavoured shaved ice.

On my second day as it was once again too windy to do most marine activities, so I decided to explore Ishigakijima on foot. As I visited towards the end of peak season, I enjoyed having the place practically to myself. When the tide came in Ishigakijima stole my heart and took my breath away. Kayakers ambled down deep green mangrove lined rivers, fish jumped around in clear blue waters, volcanic rock formations stood out stark against the never ending blue. 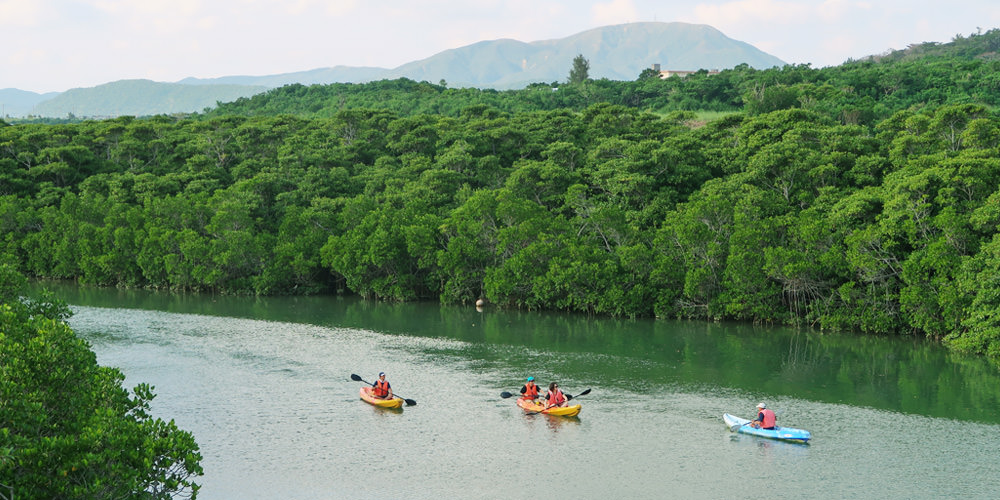 Okinawa being geographically quite far from the rest of Japan has many qualities that makes it unique, the most obvious being the dialect they speak and their cuisine. The use of citrus and tropical fruits is refreshingly prominent. I enjoyed many versions of mango from mango vinegar to mango inspired cocktails. Shikuwasa is an Okinawan citrus fruit with a light juiciness that dances on thirsty tastebuds. Strong flavours, like the bitterness of goya or the salty poppy-ness of umibudo (sea grapes) add a surprising element.

On my first night I decided to treat myself to a Japanese course menu known as omakase, at the hotel restaurant. I was fortunate to have a very friendly waitress who explained in depth each dish right down to the different dialects. Na-bera- a long cucumber-like vegetable is known ashechima in mainland Japan, mi-bai is an Okinawan fish which I enjoyed as sashimi, it is known ashata. A fried fish dish served up to me as gurukun in Okinawan dialect is otherwise known as takasago. 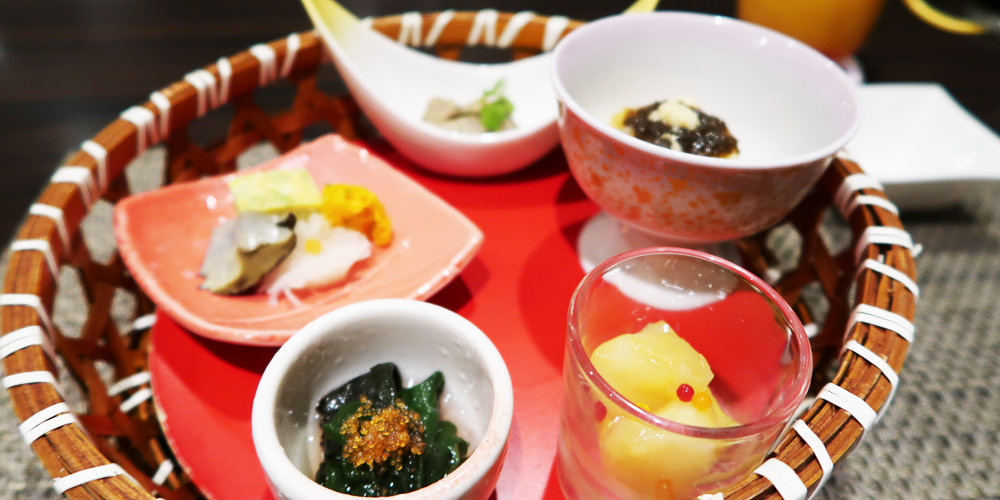 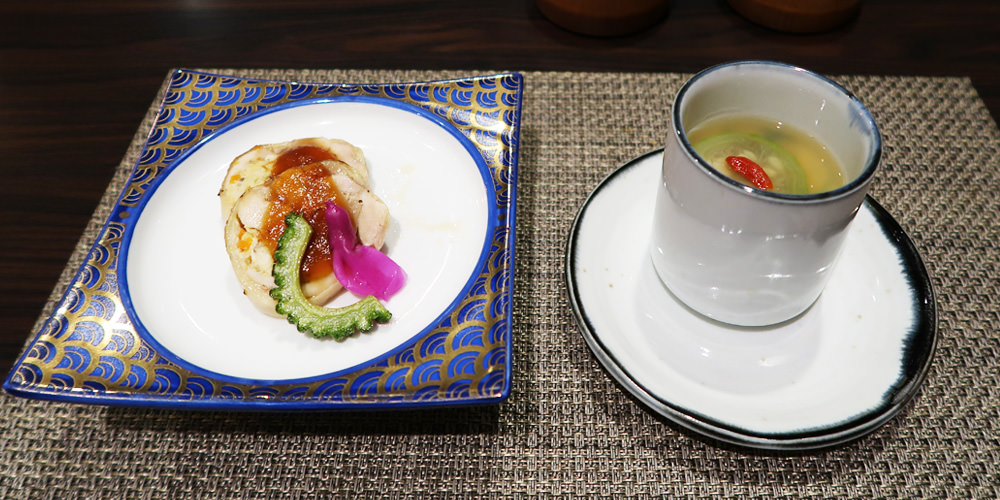 Ishigakijima also boasts a range of cuisine separate from the rest of Okinawa.Yaeyama soba has a different shape noodle to Okinawan soba, and tastes a lot different to soba noodles from the mainland. Ishigaki beef is renowned for its quality and flavour, I was able to try some on my second night, it was succulent and rich.

With just two days spent in Ishigakijima I am itching to return as there is so much more I want to see. I want to swim with sea turtles, dive deep and marvel at rainbow coloured coral. I want to walk through the Yonehara Palm Tree Groves and visit picturesque Kabira Bay.

In the spirit of Island Time I would recommend setting aside a few extra days to allow yourself to leisurely take in everything. Hiring a car would be the best way to get around the island, most places are within a 30-minute drive and bus services, although available, can be infrequent depending where you want to go. Remember to bring an International driver’s license if you want to hire a car in Japan.

Author :Ashleigh Dollin is a multimedia journalist who has covered topics such as world news, snow reports and most recently Japan travel stories. She has travelled to Japan five times and lived in Hokkaido for a year where she fell in love with the food, the people, the culture and of course the powder snow. 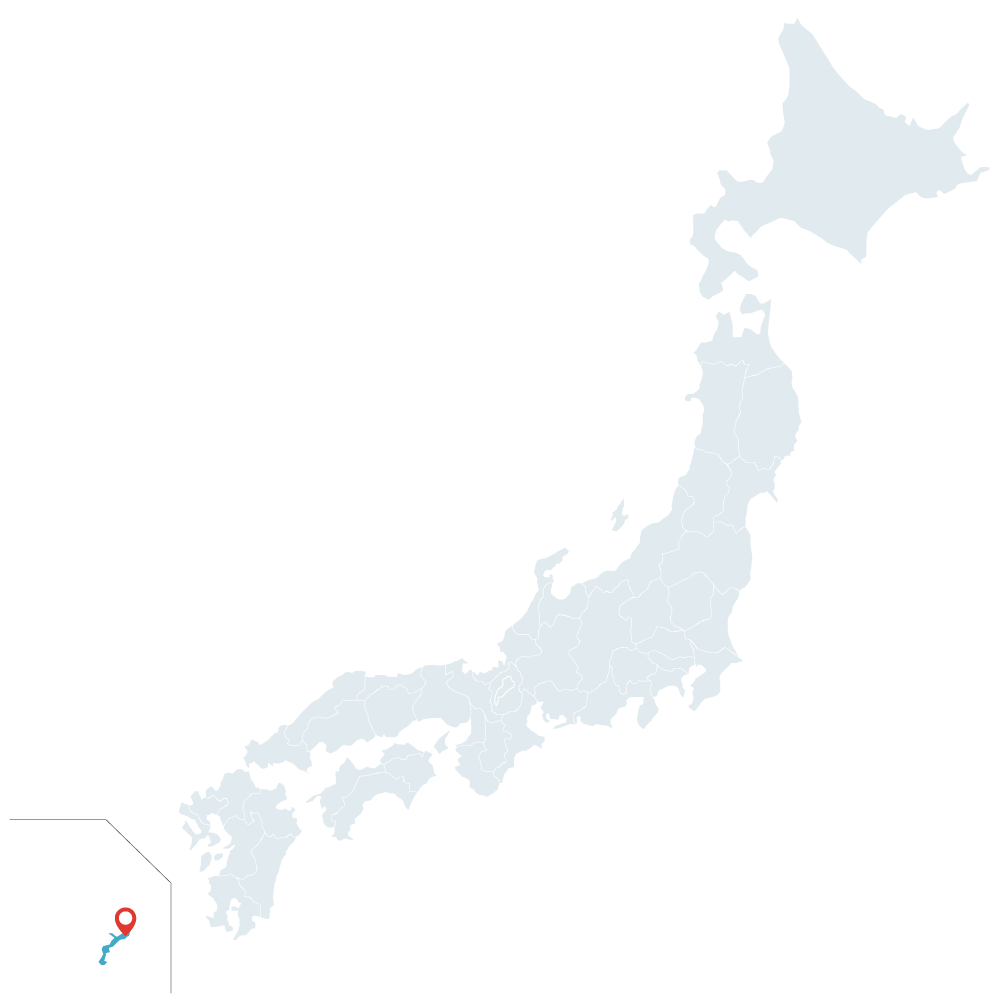 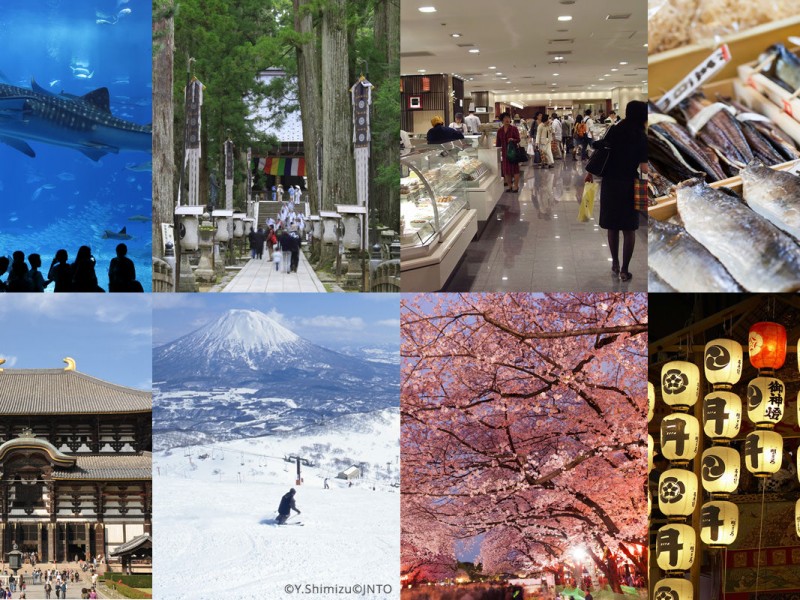